Example for the effect of the lumbar lordosis on the compression of abdominal veins - Prof. Dr. Thomas Scholbach
5
(2)
To change the language click on the British flag first

On this page, I will give some examples on the mechanism of the lordotic compression of structures in front of the spine, thus leading to the abdominal compression syndromes

In the first example, a strong lordosis compresses the vena cava inferior in a patient:

In the colour Doppler images, the blood flow is encoded in different colours:

Red is assigned to the flow towards the body surface,

blue is assigned to the flow away from the body surface,

green is assigned to a turbulent flow which points to an acceleration or pathologic disturbances of the blood flow.

The images above demonstrate the fact of the compression of the vena cava by the lordotic spine. At its beginning, where the vein is still wide, the flow is rather slow -22 cm/s. A few centimeters higher, where the turbulences occur, the flow velocity increases rapidly to a value that is eight times higher than normal.

The image below shows the severe compression of the left renal vein in a  nutcracker syndrome. The compression is exerted by the anterior bulging of the lumbar spine, pressing from behind against the aorta. The uplifted aorta then compresses the left renal vein from behind, thus causing an extreme flow acceleration to 346 cm/s in a vein! This is about 15 times of the normal flow velocity in the left renal vein. The images below show the effect of the decompression by active stretching of the lumbar spine, thus counteracting the lordosis and reducing the lordotic pressure. The turbulences nearly completely disappear, and the flow velocity drops to a ninth of the former values, thus pointing to the reduction of the venous pressure in the same range.

The images below demonstrate the effect of the pressure of the lumbar spine onto the compression of the left renal vein in the arterial nutcracker seen in a horizontal section.

In the left image the patient is in a relaxed, thus “normal” body posture. The left renal vein is nearly completely compressed by the aorta from behind. 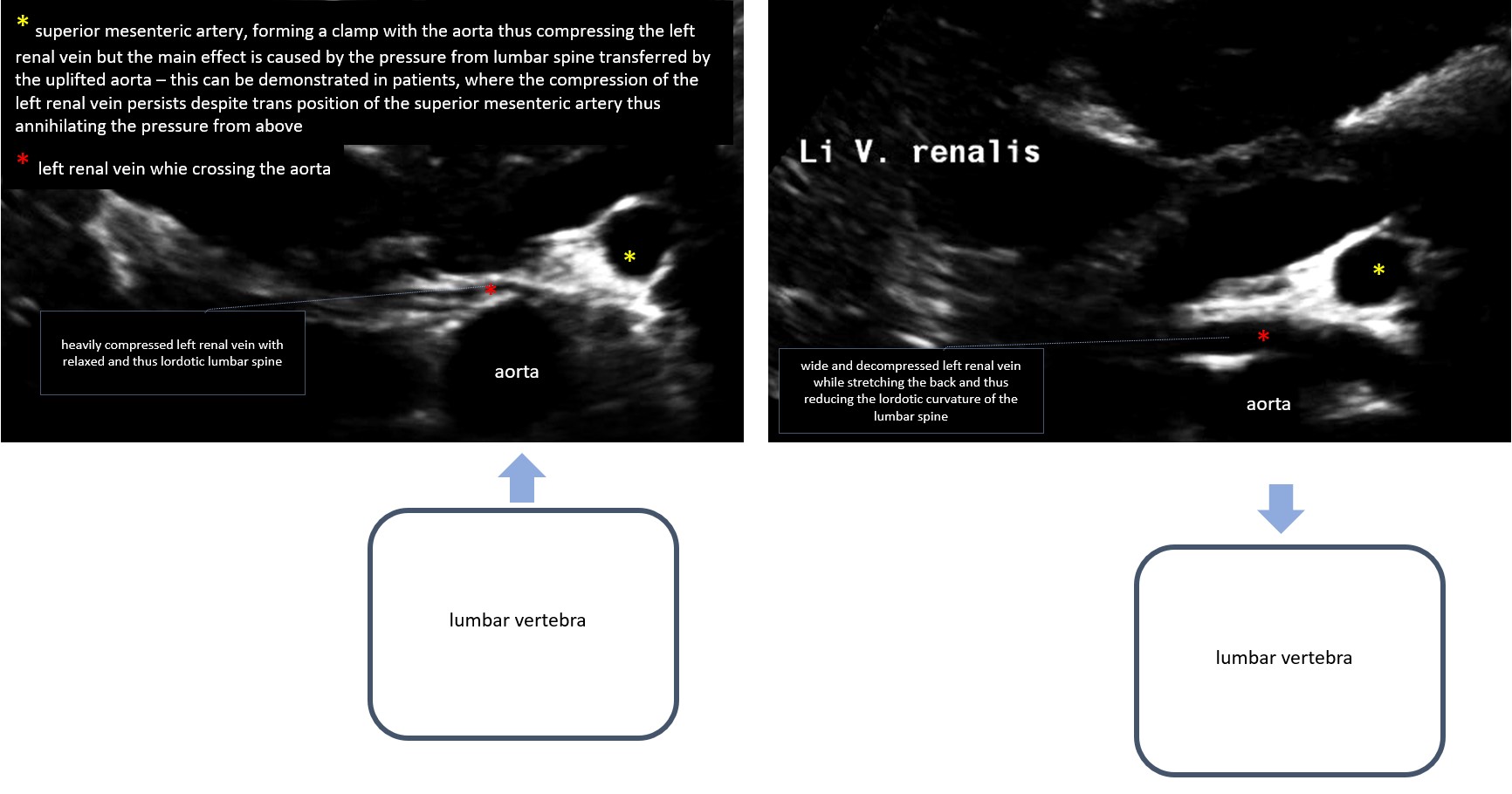 The evaluation of the effect of the lordosis on vascular compression syndromes is based upon the PixelFlux technique.

This method allows an unprecedented detailed description of the hemodynamic effect of vascular compression syndromes and their treatment. 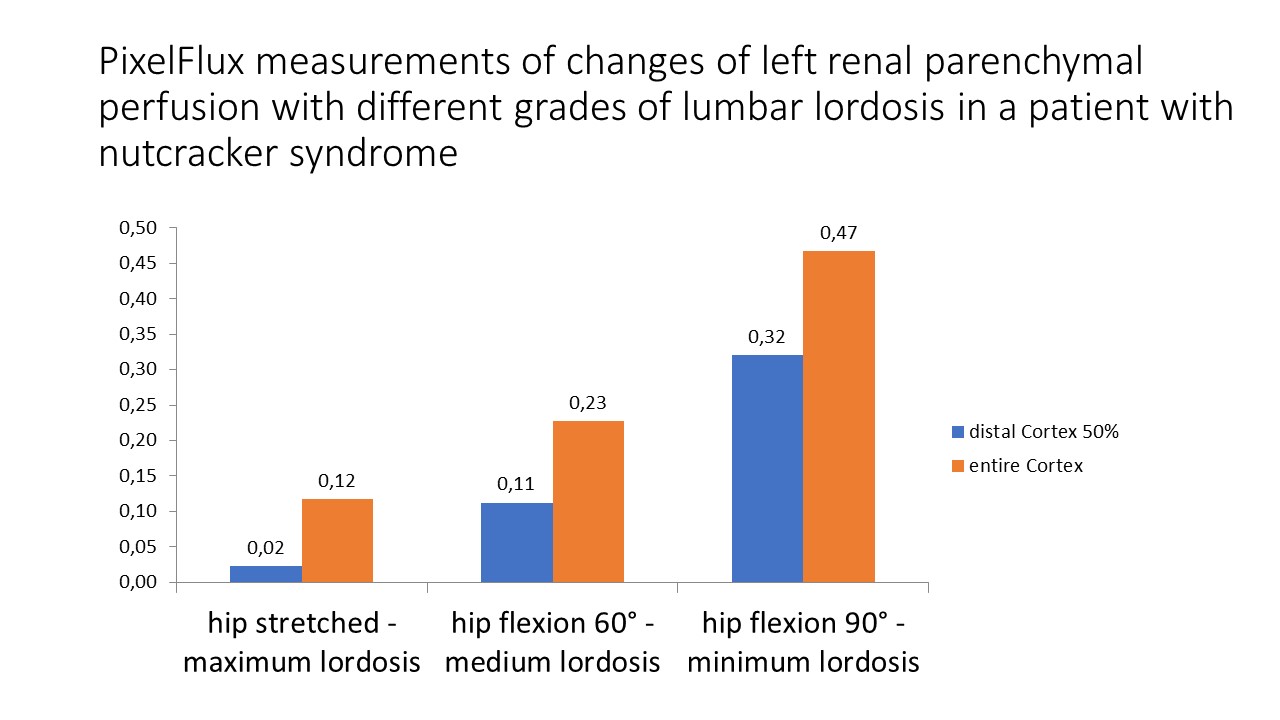 The left diagram below demonstrates the effect of the left renal venous outflow obstruction onto the perfusion of the parenchyma of the left kidney (links). The PixelFlux measurements demonstrate a suppression of blood flow in the left kidney (links) to roughly 1/10 to 1/4 of the right (rechts) kidney, depending on the layer of parenchymal vessels (proximal vs. distal cortex).

Only the PixelFlux measurements can show clearly that there is a tremendous effect of the nutcracker syndrome on the left (links) renal perfusion. Such measurements are an indispensable precondition for a sound decision, whether to operate or not.

In the right diagram, the success of the vascular surgical intervention is demonstrated again by the PixelFlux technique. The increase of the left renal perfusion can be demonstrated and gets to the factor of 4-10, again depending on the layer of cortical vessels. 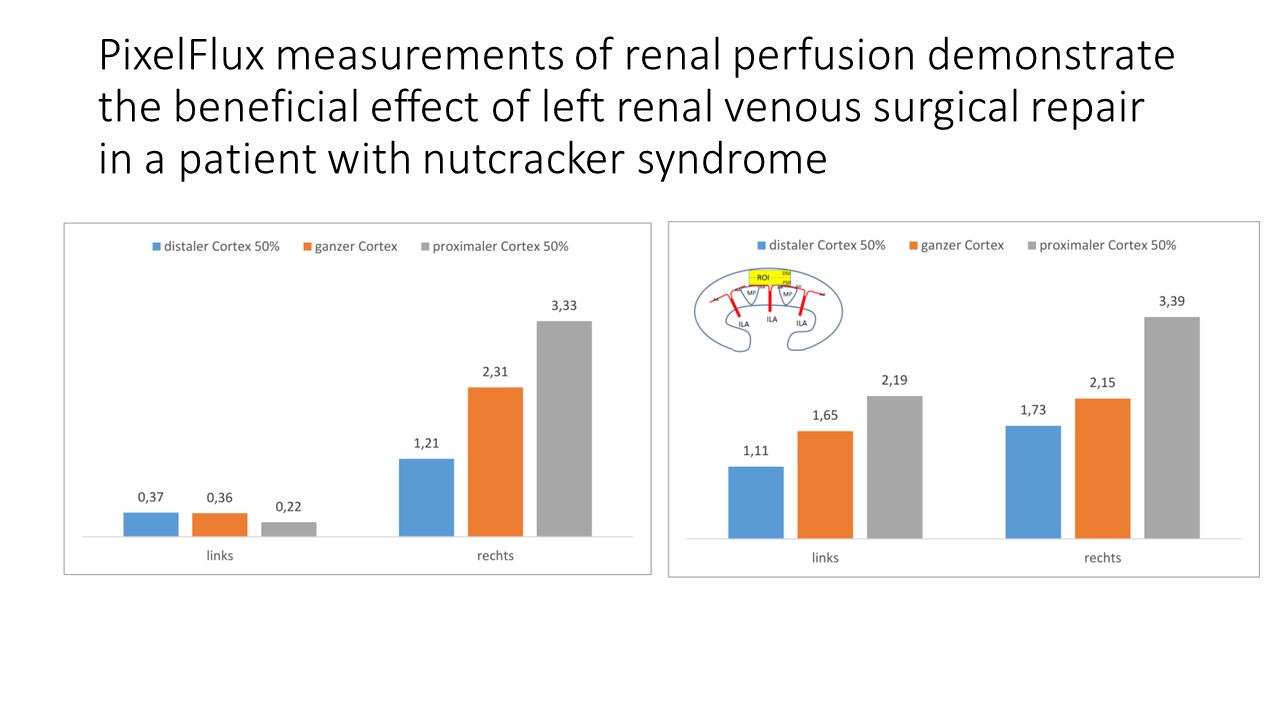