At the European Ultrasound Congress EUROSON in  Ljubljana, 22 nd  – 24 th  September 2017 I inaugurated my novel concept of the  lordogenetic midline congestion syndrome.

The sequelae of the lumbar lordosis are not restricted to abdominal compression syndromes. A strong lumbar lordosis can cause subsequently a stronger cervical lordosis. Here the compression of the jugular veins can be found which may be compressesd by the lateral processes of the cervical vertebra.

Also a medium grade left sided convex scoliosis of the lumbar spine is quite often found. So the influx of congested blood from the left paravertebral veins is made easier. This may cause neurological as well as orthopedic symptoms.

My concept of the novel lordogenetic midline congestion syndrome is outlined below: 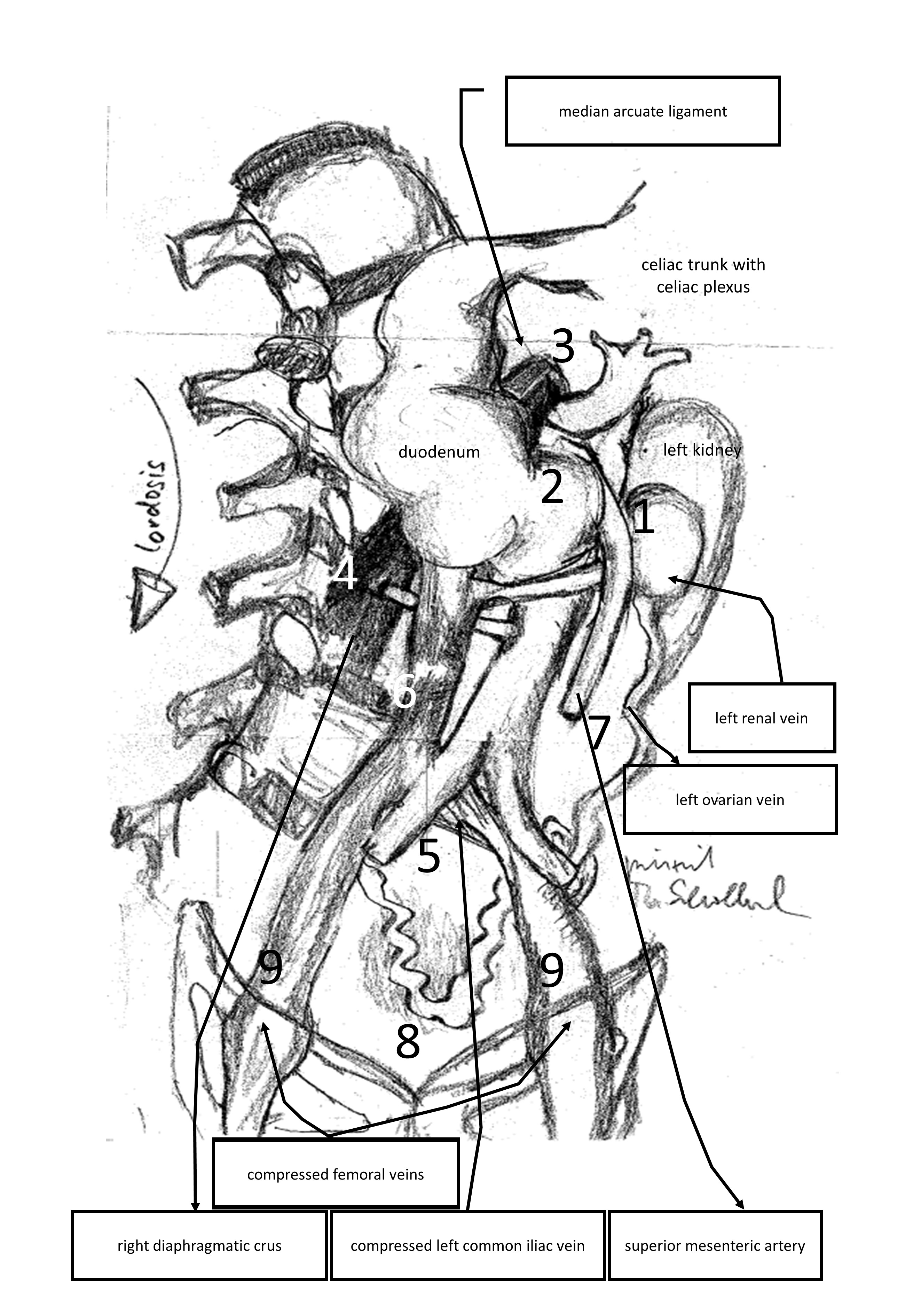 In fact, in the author‘s experience, they are very frequent but are missed due to misconceptions regarding their mechanisms.

A main characteristic of all vascular compression syndromes is the eye catching preponderance of females. For more than 90% of all cases occur in women or girls but quite rarely before puberty.

I present here a unifying concept for all kinds of vascular compression syndromes. It is based on the specific characteristics of the human spine. The bipedal human gait leads to a vertical orientation of the spine which is a unique feature not present in other bipedal animals. After the first year of life, the spine is set under a longitudinal gravitational pressure due to the upright position in standing and walking. The adaptation to gravity is an S-shaped configuration with a lordosis in the lumbar spine. Lordosis is more prominent in younger women and postpubertal girls than in any other population subset. The abdominal vascular compression syndromes may be regarded an extension of gynecology but prompt to dissolve the borders between medical specialties, because many of them are contacted by the suffering patient. Only who can look beyond the borders of one specialty will recognize  the true origin of the symptoms and can treat properly.

Lordosis is the decisive factor in all abdominal compression syndromes

6. Compression of the inferior vena cava due to streching of this vein across the lordotic apex

Moreover, in slender women  the overextension of the hips in upright stance and supine posture  with stretched legs may cause

between the pecten ossis pubis and the inguinal ligament.

1.Abdominal vascular compression syndromes are not separate diseases but parts of a spectrum of one entity – the lordogenetic midline congestion syndrome and thus often occur together

2.The picturesque symptomatology* is not a psychologic dramatization by the patient but the consequence of venous congestion of many organs – from toe to brain

3.The diagnostic needs to rule in and out every single sub-syndrome

4.to establish a treatment plan that tackles the most relevant sub-syndromes orderly

5.The patient needs a doctor who is informed about the interplay of all sub-syndromes

Tension in the left leg, pain and swelling, thrombosis of the left leg and deep left pelvic veins – later similar symptoms in the right leg, genital and thigh varicoses

6 – Compression of the inferior vena cava:

Headaches, migraine, morning congestion of the nasal mucosa – disappearing after 30 min in an upright position, back pain, sciatica, lumbago, throbbing pain in the back,

9- Compression of the femoral veins: