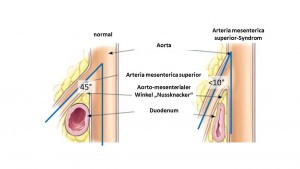 The Wilkie-Syndrom, aka superior mesenteric artery-syndrome, is a vascular compression syndrome that is caused by a compression of the duodenum by the upper bowel artery shortly after its origin from the stomach. The patients suffer from postprandial pain, feel the food sticking in the upper right abdomen and often experience a severe distension of this region, bloating, repeating and even vomiting. They loose weight. Sometimes a left lateral position gives some relief.
Some cases are the result of a general weakness of the peristalsis, in other cases the tightness of the angle between the aorta and the upper bowel artery causes the syndrome.
We make the diagnosis in a single functional quantitative color Doppler exam which takes into account all the peculiarities of your individual situation. This means, we start while you have an empty stomach, proceed while you eat and follow the path of your food watching each peristaltic wave. This is done in a variety of body positions – according to your individual pattern of complaints.
This way – non-invasively and radiation-free – we do also a thorough exam of all the other vascular compression syndromes in one setting. Very often the individual pattern of vegetative and pain-symptoms is a result of overlapping features of more than one vascular compression syndrome. To plan the treatment, it is therefore necessary to describe in detail their contribution to your disease.

Patients with Wilkie-Syndrome can exchange their experiences in a web-group.

The video below shows the duodenal compression in a patient with empty stomach:

This video shows food sticking in the duodenum in front of the compression site:

The last video shows a duodenum pushing its content across the compressing clamp, consisting of the aorta and the superior mesenteric artery:

In this patient a persistent duodenal compression is clearly visible. Extreme pain waves synchronous with the peristalsis run against the clamp – the patient moans in pain.

In many patients with Wilkie syndrome turning to the left side supports the food transport due to several reasons:

Here is such an example where turning to the left gives prompt pain relief during decompression of the duodenum:

Here are examples for a normal passage of food through the duodenum – no Wilkie syndrome:

The video below illustrates how a narrow angle between aorta and mesenteric artery (AMS) which is often the traditional (but false) hallmark of a Wilkiw syndrome in angiograms or CT may open if the peristaltic wave approaches and if it is strong enough. With functional ultrasound it is easy to avoid this diagnostic trap and avoid an unneccesary and frustrating operation.

The aorto-mesenteric angle may appear narrow  – seen from the side – but may nevertheless provide ample space for the crossing duodenum that winds in a S-shape course between both arteries without being compressed. Again – functional ultrasound is the clue.