The causes of both migraine and multiple sclerosis are diverse and largely unknown.

Already in 2007, I inaugurated  the concept of a connection of the midline congestion and migraine (Scholbach T. From the nutcracker-phenomenon of the left renal vein to the midline congestion syndrome as a cause of migraine, headache, back and abdominal pain and functional disorders of pelvic organs. Med Hypotheses. 2007; 68(6):1318-27).


The rationale for this concept is the increased intraspinal pressure in left sided venous congestion. In venous compression syndromes of the abdomen the lordosis prevents a normal passage of blood across the midline in large veins, which have to cross the midline from left to right. 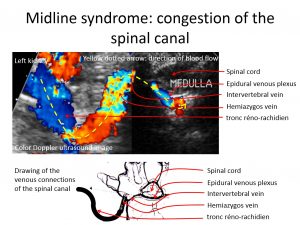 Within the abdominal cavity these are 3 large veins:

If the blood cannot pass through these veins, a pressure builds up in those part of the veins which are left to the spine. These parts dilate and may transform into varicose veins. Smaller veins which transport blood from other organs towards these large veins consequently become pressurized to the same extent as the larger congested veins.

One possible collateral route is through the spinal canal. 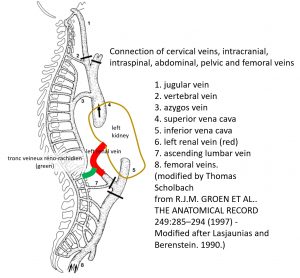 The influx of additional blood volume into the spinal canal produces a variety of symptoms. Among these are back ache, sciatica, lumbar pain, neck pain, tingling and numbness of the fingers and toes, a weakness of the arms and the legs (which may even progress to full paralysis and wheelchair-dependency) and predominantly headaches and migraine.

Only recently a scientific study of pelvic congestion syndrome, which is a consequence of the outflow obstruction of the left common iliac vein and the left renal vein, revealed the exceptionally high prevalence of migraine in patients with pelvic congestion. As a prove of the causal relationship of venous congestion and migraine the migraine disappeared after successful treatment of the pelvic congestion:

Migraine: A Common and Unknown Symptom of Pelvic Congestion Syndrome

Migraine A Common and Unknown Symptom of Pelvic Congestion Syndrome


So, if you are suffering from severe migraine, you may benefit from a thorough diagnostics of vascular compression syndromes. The diagnosis of such a compression syndrome may open the way for a causal treatment of your migraine and tension headaches.

If you want to discuss your findings, email me.

The concept of Multiple Sclerosis caused by CCSVI

According to the concept of chronic cerebrospinal venous insufficiency (CCSVI), the venous congestion of the brain and the spinal cord may contribute to or even cause the development of inflammatory foci of the multiple sclerosis. Up to now, only constrictions (stenoses or obliterations) and refluxes of the blood flow in the veins of the neck have been regarded as triggers. Investigations of different centers often could not confirm the diagnostic criteria of CCSVI!

However, the venous pressure in the brain and spinal canal can be significantly increased by the inflow of blood from the pelvic veins and the left renal vein. 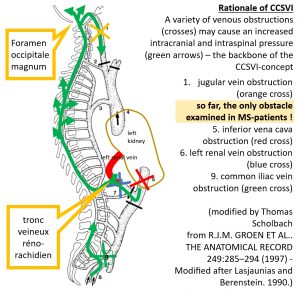 From my own experience with patients with multiple sclerosis (MS) I know that this mechanism can be detected in these patients by color Doppler sonography and the PixelFlux technique. It is therefore reasonable to extend the concept of CCSVI to include the examination of the veins of the abdominal cavity and the pelvis.
So if you suffer from multiple sclerosis and symptoms of venous congestion in the abdomen or pelvis, I recommend a colour duplex sonographic examination of all abdominal compression syndromes with the PixelFlux technique.