In midline congestion blood from left-sided organs cannot pass the lordotic lumbar spine. Lordosis or hollow back is common in women, less frequent in men, and blocks veins, crossing the spine from left (left kindey, left pelvis, left leg) to right where it enters the inferior vena cava to return to the heart. The veins fill up and cause discomfort, tension, pain and functional disability of the affected organs.

Abdominal pain: often above the navel
Back pain
Pelvic pain (in the area of the bladder and the uterus)
Headaches (often in the nape of the neck)
Congestion of the nasal mucosa after night rest – causing difficulties to breath by nose in the morning. This symptom usually disappears after being in upright position for a while.
Hemorrhoids – bleeding during or after defecation
Urgent and painful micturition, since the midline syndrome is always combined with the nutcracker phenomenon
All symptoms of the nutcracker phenomenon may be found 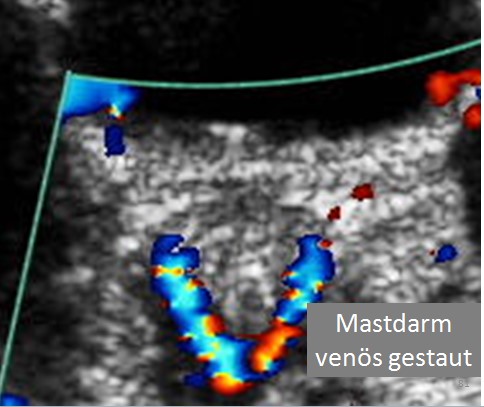 Congestion of the rectum (colored along its dorsal cirumference) behind the urinary bladder (black). This congestion may become the precursor of hemorrhoids and cause painful defecation and rectal bleeding. They may cause abrupt swelling of the rectal wall, which is often accompanied by constipation.

All these organ may function as a bridge to let the blood flow from the left side, where its source is the left renal vein, to the right side. Here it runs via the venea cavae towards the right atrium of the heart.

Congestion of the Spine, spinal cord and brain

Inside the spinal canal it fills a vast network of veins, the epidural plexus,  that lies on the on the dural sac, a sheath of connective tissue enveloping the spinal cord that swims within this sac in the cerebrospinal fluid. The cerebrospinal fluid communicates on the base of the skull with the cerebrospinal fluid that surrounds the brain. Blood entering the epidural plexus from the left side, via the collaterals of the left renal vein, fill the plexus which may become engorged. Its pressure rises so that the blood is diverted more or less, depending on the actual pressure, up and down the spine and heads to exits with a pressure less than in the left renal vein. Not rarely it simply leaves the spinal canal via intervertebral veins on the right side of the spine. These connect directly to the inferior or superior caval veins (venae cavae). If the pressure is high enough the cerebrospinal fluid is shifted towards the skull and causes a slight but perceptible rise of the pressure inside the skull. This may cause headache, dizziness and may aggravate the syndrome of Chronic Cerebrospinal Venous Insufficiency (CCSVI). Since the nasal mucosa drains its venous blood towards the base of the skull a swelling of the nasal mucosa may result. This is most prominent after a longer rest in supine position (night rest) and normalizes after a while in upright position. Some patients report teeth grinding. Other functional sequelea for the brain, especially sleep related symptoms, seem possible. Clearly, further research is needed to answer all related questions. 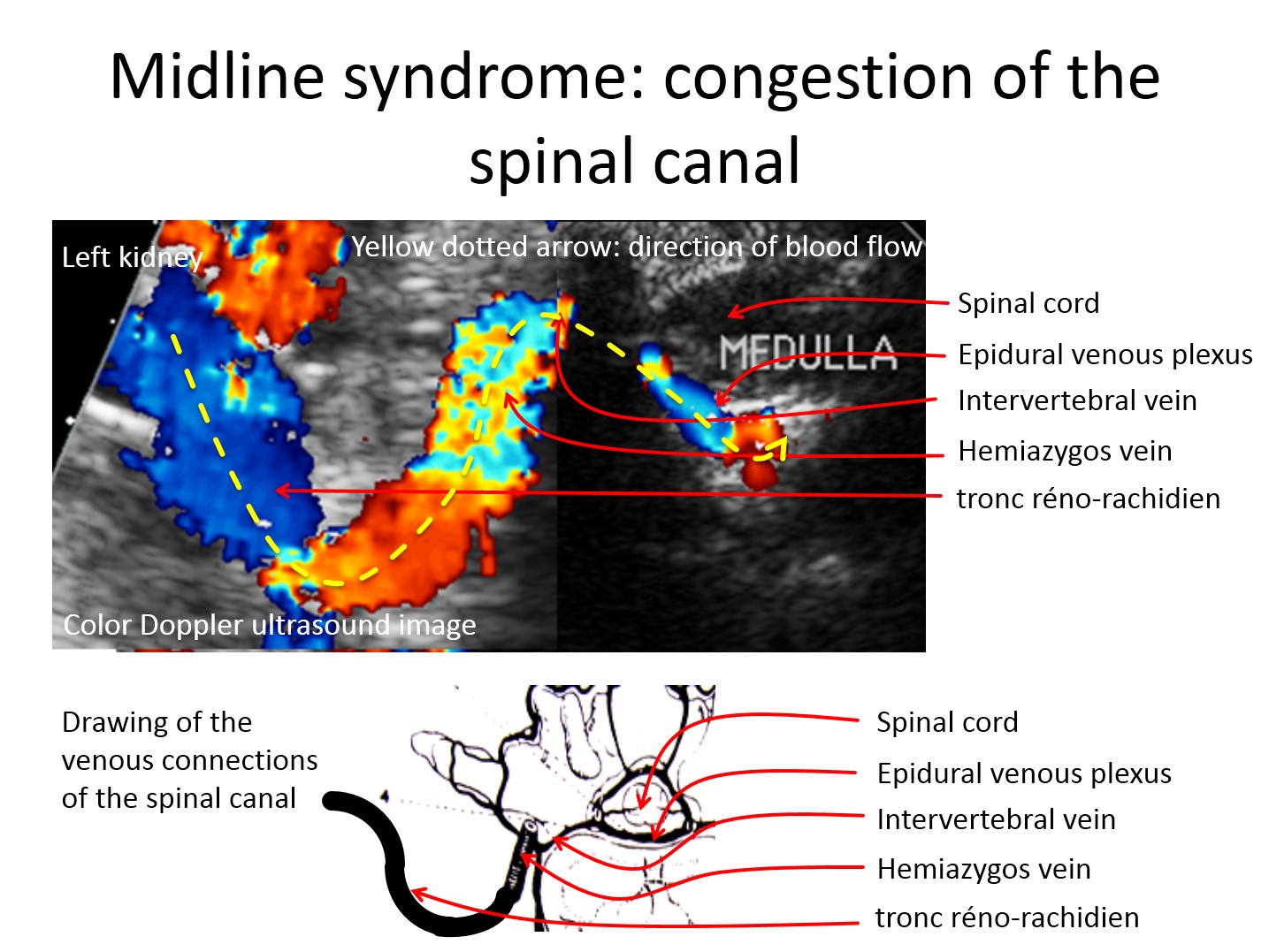 Congestion of the urinary bladder

If the urinary bladder is congested, symptoms may mimic urinary tract infection. Color Doppler sonography of the urinary bladder shows abundance of color flow signals within the wall. This enlargement of the intramural veins may stimulate receptors that erroneously misinterpret this signal as originating from the bladder. Urgent voiding with emptying of only small amounts of urine is the prevalent complaint then. 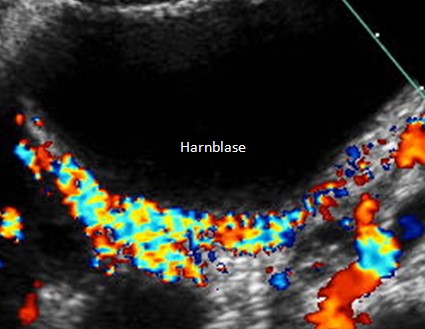 Congestion of the uterus and left ovary

Pain in the lower abdomen and characteristically in the left lower abdomen in the middle between the superior iliac spine and the symphysis is the major symptom. The pain is often debilitating and excruciating and work or school attendance is not possible. Premenstrual pain is often unusually strong. Sexual intercourse may be painful.

Great variety of symptoms   – link of mind and body

The complaints may emerge anywhere in the collateral pathways and organs – literally from head (midline congestion syndrome) to toe (May-Thurner-constellation). This is the reason that the ignorant examiner tends to disqualify the complaints as purely ore merely psychogenic. In most cases it is recommended to see a psychologist or psychiatrist for psychotherapies. In fact, there is a real connection of the pain sensations and psychological or mental sources: in psychological excitement as well as in physical exercise the heart rate is increased. This is due to the general activation of the sympathetic part of the autonomous nervous system. This sympathetic activation is the evolutionary response pattern for situations where the body needs to mobilize reserves and is prone to flee or fight. That’s why it is no wonder, that the venous congestion is aggravated in phases of stress – psychological or physical (if one still wants to separate these parts of existence). The heart pumps more blood which is trapped before the compression site of the respective vein and the pressure rises, aggravating all above mentioned complaints. The correct conclusion is therefore not to send the patient simply away to see a specialist for mental affairs but to do a thorough, quantitative, dynamic color Doppler sonographic examination with measurements of the venous pressure and flow volumes in the different parts of the collateral circulation by an experienced investigator.

From my experience with many hundreds of patients with abdominal vascular compression syndromes I can recommend to differentiate the many possible causes to choose the correct therapy – mostly by medical treatment and in rare cases by a minimally invasive operation.

Since these entities are not well known, even among many doctors, it is always useful to seek a second opinion.