Many patients with vascular compression syndromes suffer from pain in the lower abdomen radiating towards the legs sometimes with a swelling of the legs or the outer genitals. In women dyspareunia is a common debilitating consequence of massive congestion of the inner and outer genitals.

Some of these patients cannot tolerate to stand or sit for even a short time. To prevent fainting, they must sit or lay down in order to recover from rapidly increasing tachycardia, brain fog, dizziness, increasing pain in the lower abdomen and in the legs and to prevent fainting.

In these patients it is important to define the degree of orthostatic perfusion drop which means to determine the volume flow differences in the upper abdominal aorta when these patients transit from a horizontal to an erect posture of the trunk. Very often is not only difficult for them to stand but also to sit. From a physical perspective standing and sitting bear important similarities-gravitational traction is in parallel with the orientation of the trunk. Thus, gravitation pulls the blood down towards the pelvis and-while standing-into the legs and feet.

I report here on a new sign of severe venous pooling in the pelvis in a patient which could not tolerate to stand for a short while. Even while walking around during her work as a hairdresser, she could not work longer than 2 hours and then needed a rest because of the above-mentioned symptoms.

The volume drop within the aorta was extreme as soon as the patient turned from a horizontal to a vertical posture.

The aortic perfusion volume dropped from 2677 mL/min to only 637 mL/min which is a orthostatic reduction of the circulating blood flow volume by 76%! 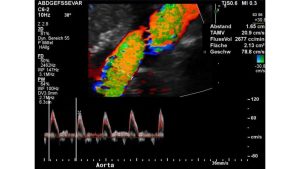 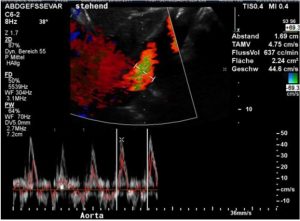 In this patient I observed an impressive heartbeat by heartbeat reduction of the cardiac output evaluated by the Doppler signal within the coeliac trunk in a standing posture. 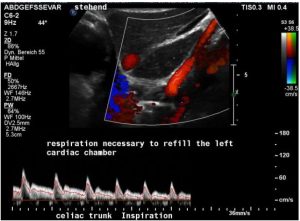 This effect was only visible inspiration but not in expiration. 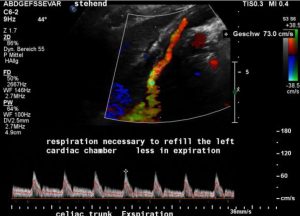 My explanation for this different reaction of the circulation onto the position of the diaphragm:

In deep inspiration the diaphragm is contracted at maximum to enlarge the thoracic volume but simultaneously exerts maximum pressure onto the abdominal cavity. Then the diaphragm is squeezing the bowel into the pelvis. Not only the abdominal organs are pushed down but the high pressure in the abdomen which is produced by the down pressing of the diaphragm puts counterpressure onto the venous return from the pelvis. Thus, as soon as the patient inhales deeply and holds the diaphragm in this position suddenly only little blood can return from the pelvis to refill the heart. Thus, the filling of the left cardiac chamber is significantly reduced only by holding the diaphragm in a deep inspiratory position. So, heartbeat by heartbeat the cardiac output declines at a staggering rate what is shown in the ultrasound image and the table above.

In expiration the diaphragm is maximally relaxed allowing it to resume its dome shaped position. This reduces the lung volume but increases the abdominal volume thus decreases the pressure onto the blood vessels which in turn allows an easier upstream of blood from the pelvis towards the heart. This, from my perspective, is the reason that in the same patient in expiration no dropping cardiac output can be observed.

This may be a valuable and simple sign to estimate the severity of venous pooling and the distensibility of pelvic veins in patients with connective-tissue disorders and a severe orthostatic intolerance resulting in postural tachycardia syndrome, fainting , brain fog , inability to stand or sit for even a short while, increasing abdominal pain and tension in the legs.

Even without ultrasound this could be eventually used as a clinical test to evaluate a patient with orthostatic tachycardia. The patient may simply be asked to stand upright and then should be observed while deeply inhaling and holding the diaphragm in comparison to holding the diaphragm in in expiration position. It can be observed expected that the circulatory response with the need to sit down or lay down is more urgent during the inspiratory arrest of the diaphragm compared to the expiration arrest.