An erect stance causes an anterior tilt of the pelvis due to the anatomy of the human hip joint. Ligaments restrict a stretching of the hip joints above an angle of about 45° less than the full stretching. This was detected by my father, Dr. Manfred Scholbach, who researched on the so-called restricted hip stretching of newborns. He described for the first time that in newborn babies the femur always has an angle of about 90-130° with the horizontal plane when the babies lie on their back. A passive stretching of a newborn’s hip to align the femur with the spine inevitably causes a tilting of the entire pelvis producing an elevation of the sacral bone and caudal lumbar spine. Thus, he claimed and confirmed that a full stretching of the hip is achieved when the femur has an angle with the horizontal line of about 45° while the patient is in a supine position.

Only later in childhood after they begin to walk  children acquire the ability to align their upper thighs with the direction of the spine. But this requires and anterior tilt of the pelvis. This tilting, in addition to the effect of gravity on the upright spine, is responsible for the lumbar lordosis of the human spine, which is not an inborn feature of the human anatomy but an acquired one.

The range of motion of the hip joint of a human being is similar to that of quadruped animals. Observing a running dog or a horse illustrates the above explained research. These animals , even during a full speed race never raise the hind legs to a horizontal line. But this would correspond to the achievement of a full hip stretching as it is typical for human beings beyond the age of 1 year.

The full hip stretching thus pulls the blood vessels and nerves at the ventral surface of the upper thigh across the pubic bone. If humans would walk on 4 legs as quadruped animals do such a stretching would be omitted.

I demonstrate here for the first time a so far (2021 09 11 ) undescribed effect of a pathologic stretching of the femoral artery across the pubic bone in a lady of 87 years who developed a painful reduction of her walking distance. After about 500 m she regularly complained about pain in her right calf which  prompted her to sit down and rest. Sometimes painful muscle cramps occurred sometimes only a dull pain developed. There was no swelling of the leg and no discoloration, nor a bluish or a pale one.

Examinations of her electrolyte metabolism, blood pressure measurements in both legs and neurologic examinations did not reveal any abnormality.

The blood flow measurements in her right and left leg as well as in the aorta and the right iliac arteries revealed a dampened pulse-wave throughout the entire right leg while the patient was lying supine with stretched hips. There was no stenosis within the aorta nor the iliac arteries on the right side. No stenotic changes in the right femoral, popliteal, and tibial arteries nor in the arteries of the right foot could be demonstrated. 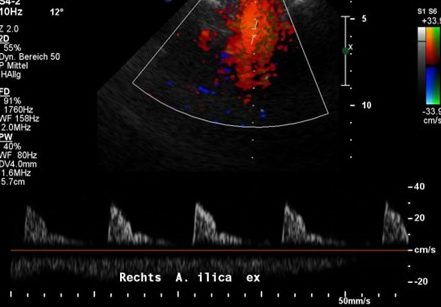 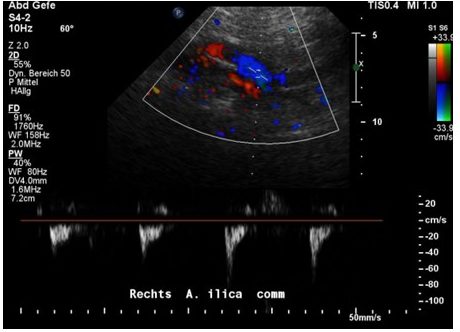 Nevertheless, it was impressive that the blood flow volume in the dorsal artery of the left foot was 29 mL/min whereas in the right foot it was only 9 mL/min in a supine position with stretched hips. 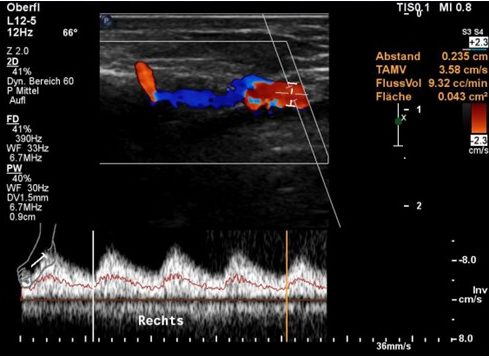 The diastolic flow velocity in the right dorsal artery of the food is relatively high. This is a sign of dilatation of the blood vessels to exhaust the remaining blood flow volume in severe ischaemia of the entire leg. This cannot compensate for the severe drop of blood flow volume to only 9.32 mL/min which underscores to severity of the ischaemia while the hips are stretched. 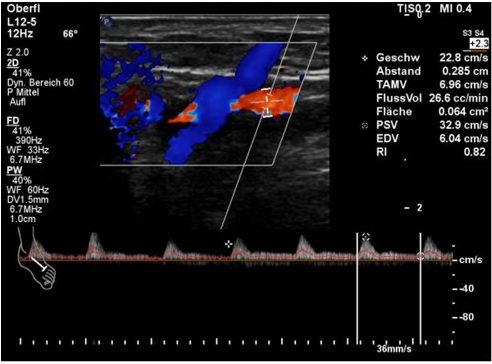 In comparison to the right foot, the left foot has a normal arterial perfusion with only little diastolic flow but a much higher flow volume: 26.6 mL/min. The left femoral artery is not compressed contrary to the right one. 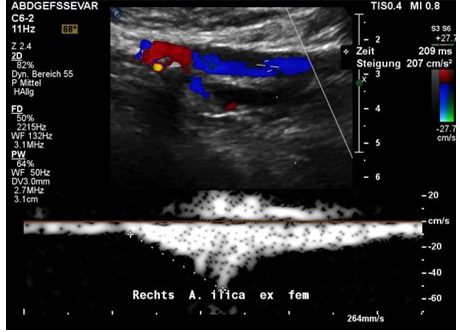 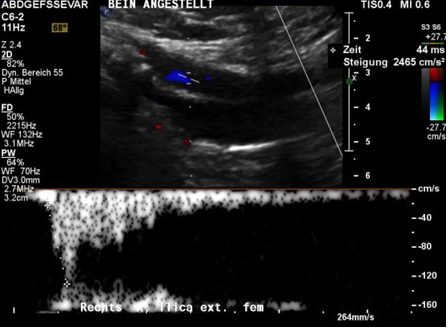 A variable compression of the right femoral artery by the pubic bone could be demonstrated as the reason for the disturbed arterial perfusion of the entire right leg in body postures with stretched hips.

The flow signal significantly changed from a normal one above the pubic bone on the right side to a slowly increasing systolic blood flow with a dampened height of the maximum flow velocity below the pubic bone in the arteries of the right leg as long as the patient stretched her hips.

This corresponded very well to her clinical description of a painful reduction of her maximum walking distance. While being upright the perfusion of her right calf was reduced to one third of the left calf. This led to an ischemia, recognizable as a relatively increased diastolic flow velocity to exhaust the oxygen from the remaining perfusion volume. The ischemia caused muscle cramping and pain while walking.

Since during sitting the hips are flexed a restoration of the blood flow volume occurs and the pain subsides. 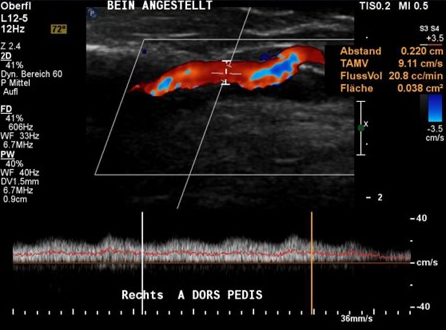 After flexing the hip, suddenly the blood flow volume in the right food and the entire right leg turns to near normal: 20.8 mL/min compared to 26.6 mL/min on the left side.

Only a qualitative flow volume measurement could depict the true severity of the variable compression of the right femoral artery which reduced the entire blood flow volume to one third. Simple flow velocity measurements would substantially underestimate the degree and thus the clinical impact of this peculiar mobile arterial compression syndrome.