Post-prandial pain in the right upper abdomen due to a newly detected compression syndrome of the right renal vein - Prof. Dr. Thomas Scholbach
4
(2)
To change the language click on the British flag first

In some patients the duodenal function is retarded or disturbed. Then , after the ingestion of food , the stomach empties large amounts of food into the duodenum. Now the descending portion of the duodenum progressively enlarges and exerts pressure onto the right renal vein. The vein is squeezed from above by the steadily distending duodenum and from below by the stiff right renal artery. The artery exerts a pulsatile pressure onto the right renal vein since the artery cannot move away because it lies on top of the lateral surface of the lumbar vertebra. This bony resistance with the artery on top presses the vein from below whereas the growing pressure from the distending duodenum presses the right renal vein from above. This causes a gradually increasing venous congestion of the right kidney which is felt as a growing pain in the right flank , in the right upper abdomen below the liver or in the right upper back.

I detected this condition in many patients in whom I meticulously observed the duodenal transport to rule out a Wilkie syndrome. The patients ingested tolerable amounts of food and fluid and then I started observing the transport in the descending and horizontal part of the duodenum.

In many patients an intermediate state exists resembling a low-grade Wilkie syndrome.

These are relatively frequent conditions which do not fit in the pattern of a Wilkie syndrome and are often misdiagnosed as a gastroparesis. The gastroparesis is usually diagnosed with a scintigram showing a delayed emptying of the stomach. This is then interpreted as a decreased activity of the stomach. In fact, I never saw a decreased motor function of the stomach in these patients. To the contrary I often see a very hefty contraction of the stomach starting after the ingestion of food which is often accompanied by burping or the feeling of fullness or even gulping and sometimes vomiting.

So, despite the diagnosis of gastroparesis a strong peristaltic activity of the stomach presses food into the descending portion of the duodenum. Now the food distends the duodenum progressively exerting pressure onto the right renal vein according to the above-described mechanism. Then , only after multiple futile compressions, small amounts of food pass little by little across the aortomesenteric fork. In some patients the fork is relatively tight adding to the pressure in the contracting descending part of the duodenum. In other patients the fork is open but nevertheless a disturbed motor function of the descending part of the duodenum causes the above-described compression of the right renal vein.

It is necessary to prove the above-described mechanism by a pre–and post-prandial PixelFlux measurement of the blood flow in the right kidney which shows a deteriorating perfusion of the subcapsular vessels of the right kidney after a meal. This is the consequence of the growing venous counterpressure suppressing the blood flow in the tiny subcapsular vessels of the kidney when the pressure inside the right renal vein grows steadily after a meal.

Post-prandially increasing distension of the descending portion of the duodenum which exerts pressure onto the right renal vein. Then a jet-like emptying highlights the pressure but transports some amount of food across the aortomesenteric fork. In many patients multiple contraction waves are necessary to slightly diminish the pressure inside the steadily dilating duodenum. The increasing venous congestion explains pain in the right upper back (the position of the right kidney) and in the right upper quadrant (position of the painfully enlarging duodenum) 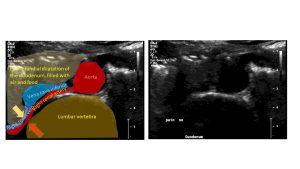 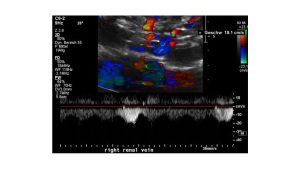 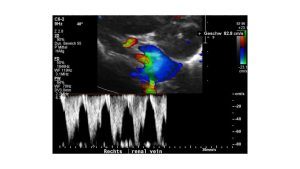 This image shows the pulsatile flow acceleration due to the compression of the right renal vein (blue vessel) by the compressing right renal artery (red vessel). The flow velocity increases to 81 cm/s! The flow is rhythmically interrupted due to the arterial pulse. The ensuing turbulences are highlighted by green pixels inside the blue vessel. 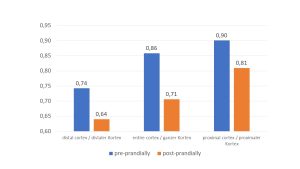