The  16 years old lad noticed a dark discoloration of the urine, initially dark brown, later reddish, in August of this year. Blood clots were not visible. There were no complaints during and after micturition. Since then, it has been noticeable that in the morning, after a night’s rest, the urine is never discolored with blood. At most, it is occasionally cloudy. Proteinuria is almost constantly detectable. In the course of the day, depending on physical exertion and the duration of holding an upright posture, there is an increasing excretion of larger amounts of blood, which produces an increasingly dark red colour of teh urine.

A cystoscopy revealed normal findings, as did an MRI of the abdomen. His nephrologist initially suspected haemolysis, but anaemia could not be found. A subsequent hematologic differential diagnosis did not explain the haematuria. On repeated urological examination after exclusion of kidney stones, a nutcracker syndrome was contemplated. The repeat ultrasonography by a paediatric nephrologist now revealed a retroaortic left renal vein with a pressure gradient that manifested as flow acceleration to 100 cm/s. A connection to the hematuria, its lacking in the morning and  especially its increase only in the evenings, could not be established.

The patients developed an increasing sensation of pressure under the right costal arch throughout the day to a maximum of 3/10. He also describes exercise intolerance due to an increasing restriction of inspiratory excursions with a subsequent shortness of breath. Hemust then stop athletic exercises. Nausea , vomiting, diarrhoea, swelling of the legs, pain in the abdomen, thorax, back, or head, are denied.

There has been no weight loss and food intake is unaffected. Blood pressure is within the normal range.

He presents for clarification of the so far etiologically unclear haematuria increasing during the day. 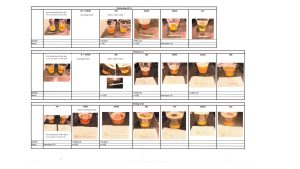 On palpation of the abdomen, no circumscribed tenderness can be elicited, and no pathologic resistance can be palpated. Auscultation reveals no vascular sounds and normal peristalsis. Vasculature of the abdominal skin is unremarkable, The Beighton score is 6/9 (hyperextensible elbow joints, hyperextensible knees, thumb sign positive bilaterally).

The urinary bladder is moderately filled, the contents clear, the wall smooth, three-layered. The prostate presents commensurate with age; however, markedly dilated veins can be seen on the right circumference.

Blood flow volume ionside the left internal iliac vein is intermittently interrupted, arterially pulsatile modulated, with 118 ml/min. This corresponds to just less then 50% of the expected perfusion volume. The right internal iliac vein shows an uninterrupted cephalad but also arterially modulated blood flow with a perfusion volume of 145 ml/min. Later, it can be shown that the compressing renal artery is responsible for this arterial flow modulation.

Flow velocities between 9 and 14 cm/s are measured in the dilated section of the left iliac vein. At the compression site caused by the left iliac artery a flow acceleration to 47 cm/s occurs. At the crossing of the right common iliac artery flow velocities up to 75 cm/s are found. Thus, a moderate May-Thurner syndrome is present with symmetrical reduction of perfusion of the iliac veins. This points to an outflow obstruction in the further venous outflow towards the heart.

This can later be demonstrated in the supine position: filling loops of the small bowel compress the inferior vena cava intermittently as a result of the pronounced lordosis of the lumbar spine, reducing the prespinal width of the abdominal cavity.

In addition, there is a marked constriction of the vena cava by the right renal artery, especially when the patient is standing. In standing, here a dramatic acceleration of flow from 26 to 213 cm/s is demonstrated.

The left renal vein runs dorsal to the aorta and is highly compressed here. The pronounced lordosis of the lumbar spine, which is also clinically impressive and compensated by a kyphosis of the thoracic spine, contributes significantly to this finding. Flow velocities of 16 cm/s are measured in the grossly dilated left-aortic segment of the left renal vein. At the compression site, strongly accelerated flows of up to 266, in some cases 281 cm/s are found. Thus, a marked lordogenetic compression of the left renal vein due to its atypical retroaortic course and the cevere lordosis is found with the the characteristic primary symptom of haematuria.

The left renal vein depressurizes itself in the supine position via a tronc réno-rachidièn to the hemiazygos vein or to the epidural plexus. About 150-180 ml/min are drained from the obstructed renal vein via this collateral circulation. 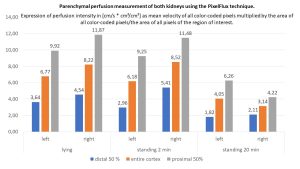 Both kidneys have a strong, inconspicuous parenchyma. Kidney volumes are at the upper normal limit or slightly above: Left at 82, right at 85 ml/m². The 2 sigmoid range ends at 82 ml/m². The 50th percentile is 62 ml/m².
In the supine position, venous congestion of the left kidney is already evident from the marked but not yet severe reduction in total parenchymal perfusion.
As soon as the patient assumes an upright posture, both kidneys clearly descend into the pelvis. The left kidney moves caudally by 5 cm, the right by 4.8 cm. 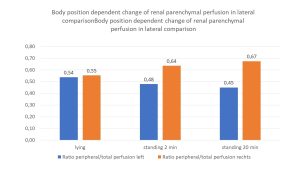 The increasing perfusion pressure of the left kidney is evident from the increasing deterioration of the pressure-sensitive subcapsular vessels: whereas in supine position approximately symmetrical pressure conditions prevail (the intraparenchymal pressure gradient is 0.54 and 0.55, respectively), already immediately after assuming the upright posture the pressure on the left increases significantly and is partially compensated by a widening of the subcapsular vessels on the right.  But after standing for 20 minutes, there is a further marked increase of the intraparenchymal pressure on the left. This finding is interpreted as follows:

During the course of the day, prolonged upright posture until the evening results in increasing haematuria due to the throttling of renal perfusion on the left with a simultaneous increase in intraparenchymal pressure. The cause is on the one hand the compression of the renal vein already in supine position and on the other hand the stretching of the vessel due to nephroptosis.

In addition, a high degree of compression of the coeliac trunk by the tightly straddling arcuate ligament is found. The only clinical correlate of this arcuate ligament syndrome is inspiratory respiratory obstruction during exercise. Whereas systolic flow velocities in the supine position of 189 cm/s are measured in the abdominal aorta, and the flow volume  is determined to be 3449 ml/min at a heart rate of 70, flow acceleration up to 501 cm/s can be demonstrated in the highly compressed trunk in the diaphragmatic midposition. During deep inspiration, the arcuate ligament retracts from the coeliac trunk, the vessel straightens somewhat, and an accessory hepatic artery, which is fully compressed in the midposition, now shows increasing blood filling. The flow velocity in the coeliac trunk drops to 283 cm/s and increases to 402 cm/s in expiration.

In standing, the perfusion volume in the abdominal aorta drops from 3449 to 2227 ml/min. This drastic decrease in central circulating blood volume reflects venous pooling in the dependent parts of the body during standing and correlates to the clinical impression of a connective tissue disorder ( DD: EDS).

In association with the clinical signs of overstretched connective tissue, it can be shown sonographically that the veins of the pelvis and trunk of the body dilate significantly during standing without improved recirculation to the heart. This indicates the involvement of venous connective tissue in general connective tissue weakness.

1. incipient pelvic congestion with
2. double, moderate compression of the left common iliac vein by the left and, to a greater extent, the right iliac artery: May-Thurner constellation
3. pronounced lordosis of the lumbar spine with clinical signs of Ehlers-Danlos syndrome of the hypermobile type with
4. intermittent compression of the inferior vena cava by adjacent loops of small intestine
5. increasing compression of the inferior vena cava while standing at the crossing of the right renal artery
6. venous pooling in the standing position with loss of about one-third of the circulating blood volume to the veins of the dependent parts of the body
7. high-grade compression of the coeliac trunk with, however, so far minor clinical symptoms (developing arcuate ligament syndrome)
8. retroaortic, highly compressed left renal vein with sufficient collateralization in the supine position, among others via a tronc réno-rachidièn
9. ptosis of both kidneys in standing position with consecutive
10. increasing strangulation of left renal perfusion and subsequent  intraparenchymal pressure increase of the left kidney while standing as a cause of orthostatic haematuria increasing during the day, lacking after night rest

Due to the painlessness of macrohematuria with frustrated nephrological differential diagnosis, a wait-and-see attitude with observation of renal function, the extent of haematuria and proteinuria, blood pressure, and especially any clinical symptoms are recommended. In case of progressive relevance of nephroptosis and or compression of the left renal vein, left flank pain, left hypochondrium pain, left varicocele and pelvic pain should be expected. Then the therapeutic approach should be reconsidered. The same applies to changes in renal function.
I recommend a sonographic follow-up in 1 year.