The patient has been suffering since January 2020 from intolerable pain in the area of the labia majora on the left side, which increases unbearably when sitting, decreases from strength 8/10 to strength 5/10 when standing, and is felt about the same when walking. This pain is always present, except at night, and is felt as an internal swelling. In the meantime, the patient had complaints in the sense of cystitis, and was also able to empty the bladder only hesitantly in the morning. Now, however, micturition is painless and bladder emptying is possible without complications. Clinically, there is a hypermobile Ehlers-Danlos syndrome. Molecular genetics excluded all other forms of Ehlers-Danlos syndrome. The hyperextensibility of the connective tissue is expressed by the fact that the patient can press the thumb on the ipsilateral radius without any difficulty, can touch the floor with the palms when standing, the thumb sign and the little finger sign are positive.

When standing, the patient feels as if something like an internal prolapse is pushing down in the pelvis.

There was also a now repaired diaphragmatic hernia.

The pain in the genital area was also interpreted as coccygodynia. Infiltration of the region with a local anesthetic provided long-term relief but insufficient to allow undisturbed sedentary occupation.

In addition, there is left inguinal abdominal pain to a lesser degree at a level of 3/10 and under the left costal arch pain at a level of 2/10. The patient also reported left scapular pain and pain on the left side of the neck, sometimes accompanied by difficulty swallowing. Menstrual pain, respiratory problems, or swelling of the legs are denied. Food intake is not affected. Vomiting or diarrhea do not exist. Numerous medical consultations have not resulted in satisfactory improvement of her symptoms. Since May 21, there has been continuous vaginal bleeding, but no gynecological therapy has been initiated; the examination findings of the treating gynecologist were fine.

Palpation and auscultation of the abdomen are unremarkable. There is no pathological resistance. On palpation of the perineum, however, a severe palpatory pain can be elicited at the dorsal commissure of the labia on the left side. Externally, there is questionable redness here, no swelling, no resistance. There is no vaginal secretion at present.

The urinary bladder is moderately full, sonographically unremarkable. The vagina is not swollen but is riddled with numerous small, dilated veins. The uterus is vigorous, anteflexed, and shows significant signs of pelvic congestion with dilated veins interspersing the myometrium in a spongy fashion, particularly prominent at the left circumference of the uterus. This pelvic congestion explains the left inguinal pain. In the internal iliac vein on the left, there is a slightly arterially modulated 667 ml/min of cranial outflow. On the right, 2 internal iliac veins are visible, which together drain 436 ml cranially. The perfusion on the left side is symmetrically increased to about double. The strong increase in perfusion on the left can be explained by the relief of the pelvic veins, which are increasingly dilated by gravity during standing, after the patient has moved to the supine position for examination and thus the influence of gravity on the pelvic congestion decreases. The congestion on the left can be explained as a result of the minor outflow obstruction via the arranged iliac vein communis at the promontory (see below).

In the supine position, a vena ovarica sinistra dilated to 8 mm can be visualized at the start of the examination. However, after repeated repositioning of the patient and assumption of a standing posture, the vessel collapses as the abdominal viscera descend into the pelvis. In this respect, pelvic congestion could be phasically fed by blood inflow from the left renal vein via an intermittently retrogradely perfused markedly dilated vena ovarica sinistra.

The vena cava is not compressed.

However, the patient’s pronounced lordosis lifts the aorta so far ventrally that there is almost complete compression of the left renal vein at the junction of the vessel over the arcuate branch of the renal artery. While in the left part of the renal vein the flow velocity is pulsatile modulated at 17 cm/s, flow velocities of up to 262 cm/s are found at the compression site in the supine position!

In the supine position, the flow volume in the abdominal aorta is 3659 ml/min, and the flow velocity in the aorta is 98 cm/s systolic.

The outlet of the truncus coeliacus is circumferentially compressed by the ligamentum arcuatum resulting in a flow acceleration to 201 cm/s in mid position of the diaphragm. In inspiration, this compression disappears, turbulent flow at the site of compression can no longer be detected, and flow velocity drops to 108 cm/s. Thus, there is a typical constellation of a ligamentum arcuatum syndrome, but without relevant clinical symptoms, except for the clinically suspected esophagitis.

The entire colonic frame is strongly meteoristically distended. When the intestines descend into the pelvis in the standing position, this leads to increasing pressure on the congested pelvic veins and to an increase in pelvic discomfort. In supine position the upper pole of the left kidney is 19.5, that of the right 17.4 cm cranial to the crista iliaca in standing position this distance decreases on the left side to 11.3, on the right side to 7.6 cm. Thus, there is a marked ptosis of both kidneys, consistent with Ehlers-Danlos syndrome, especially on the right. In standing, there is phasic relief of compression of the left renal vein, but this is short-lived. Flow velocities at the site of compression around 150 cm/s are then measured. In sitting, which is particularly difficult for the patient, the flow velocity increases again to 263 cm/s due to increasing compression of the left renal vein.

The hemodynamic relevance of renal vein compression is expressed by a markedly decreased volume perfusion of the left kidney in the PixelFlux measurement. This difference exists mainly in the supine position, where the perfusion of the left kidney is about 40% of that of the right kidney. In sitting and standing, the pronounced ptosis of the right kidney, less pronounced also on the left, causes a significant decrease in perfusion, especially on the right and a general reduction in renal perfusion. This contributes to increased blood flow into the pelvic circulation during sitting and standing, where it contributes to venous congestion.

No sonographic changes characteristic of Crohn’s disease are found in the rectum or in other bowel segments.

The PixelFlux technique measures perfusion in the area of the left perineal inflammatory infiltrate. It is a multiple of the perfusion of the tissue on the right paravaginal side. From the sonographic point of view, this is a left bartholinitis. An appropriate antibiotic therapy was started. 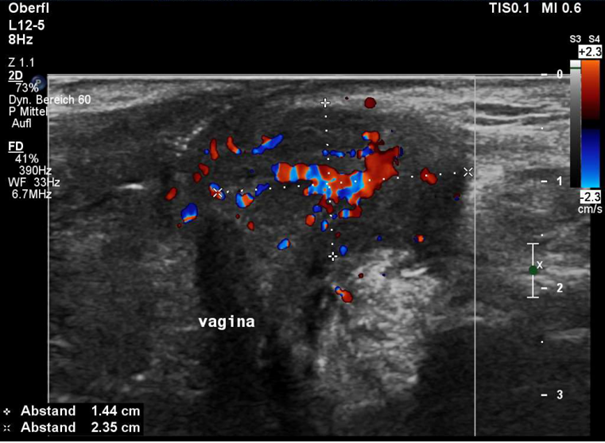 Transverse color Doppler ultrasound of the vulva at the dorsal commissure of the labia majora. On the left side, there is a well-demarcated, hyperperfused inflammatory infiltration at the site of Bartholin’s gland, exactly where the pain was localized by 1-finger palpation.