The multiple curvatures of the spine are not congenital but develop as infants start walking. Human embryos and newborns have a simple arc-shaped curvature of the spine along their entire length.

As children start walking, gravity affects the shape of the spine. In an upright posture, which is increasingly adopted from infancy onwards, gravity compresses the spine. This causes curvatures of the spine. Their extent depends on the length of the spine and its elasticity.

This was first described for a simple rod as which the spinal column is to be considered here, by Leonhard Euler, the famous Swiss mathematician, . He distinguishes four different cases of bending a rod under the longitudinal action of a force. The second Euler’s case applies to the human spine, in which lateral deflection is possible at both the base and the tip of the rod.

The critical Euler’s buckling force, Fk, is the force under which a certain rod suddenly buckles after having previously bent.

During growth to adulthood, it can be roughly assumed that the elasticity of the spinal column decreases only slightly; the moment of inertia per unit area also remains the same if the aspect ratio of the vertebral body cross-section does not change, which can be assumed. With a linear decrease in elasticity and a quadratic effect of increasing body length, adolescents therefore experience increasing lordosis during growth, especially during puberty, when they grow faster than usual. 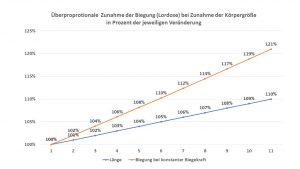 This means that taller people have a higher risk of developing a stronger lordosis. The extent of lordosis increases in comparison to another person with the same spinal elasticity not only linearly to the length of the spine but squared, if E and I remain constant.

Genetic connective tissue diseases have a particularly strong effect on the elasticity, which therefore also lead to a stronger lordosis and frequently to scoliosis as well.